Kiyan Michael is honored to have received the endorsement of Governor Ron DeSantis! 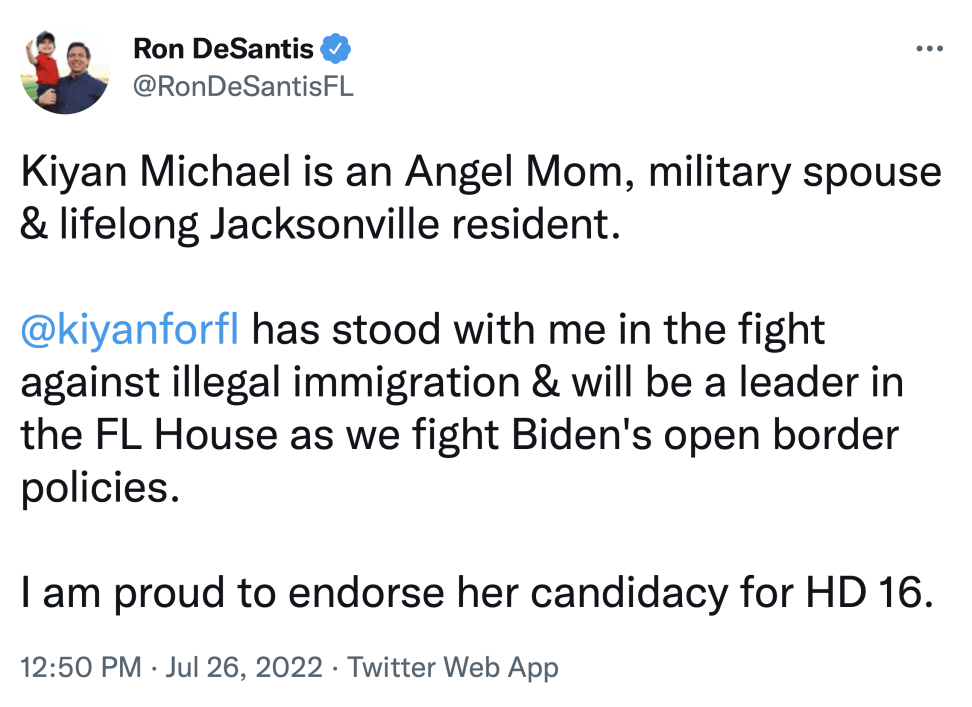 Proud to be an American and Floridian...

A Protector of Constitutional Rights

As a spouse to a 20-year Navy veteran, the military taught me some of the most memorable ideals on what it is to sacrifice, defend, and love my Country. Not just the geography of the United States, I mean the Country which is you and my family.

I am a lifelong Jacksonville resident and an “Angel Mom”. I am dedicated and determined not just to speak my mind but to carry your message to Tallahassee.

I’m excited to start the campaign for State Representative; I am a political outsider with no ties to special interest groups in Tallahassee. My priorities are to give a voice to Angel Families like ours, defend conservative values, and help Gov. Ron DeSantis advocate for more robust measures to protect our state from illegal aliens.

WHAT I STAND FOR 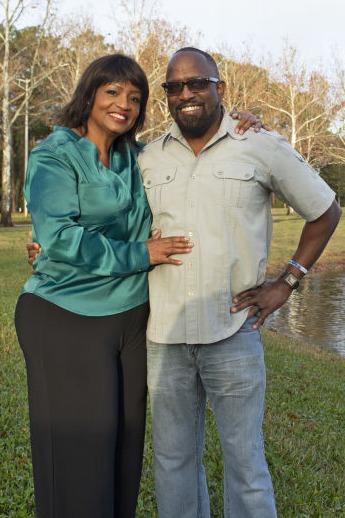 I STAND FOR YOU!

Conservative Values are under attack from the Federal, State, and Local Levels. I stand for the Values that have made this Country Great.

Liberals are seeking to destroy our core family values and heritage. The liberal media is their ally and I will stand against them.

Sanctuary Cities? Open Borders? Citizens last? My own son? We must be tough on illegal immigration agendas.

Florida is a sanctuary for retirees and Veterans. Their care, protection, and liberties are paramount. I will stand with them as they have stood for us.

Many states, many elected officials, and even more criminals "cry" out for police reform. Defund the Police is backfiring. I stand with our citizens in blue.

Keep Our State Great and Join Me!

The Issues We Face

Since the year 1776 America has stood for Freedom. That Freedom is under attack from liberal socialists who masquerade as "defenders of democracy" when anything else is but the truth.

These freedoms are guaranteed under the constitution to all American Citizens. The freedom to believe the way you want to believe, to raise your children with values and morals, to own firearms, to defend your way life from those who seek to take away your way of life. Moreover, those who would take away your life.

We as a district, state,  and nation have the right to defend these liberties. And now we must do so beginning here in our own district and state.

Illegal Immigration was a problem before we had "open borders", trust me I know. My son, Brandon, was killed by an illegal immigrant in 2007. My family is an Angel Family. I am an Angel Mother.

Biden and Harris along with the radical left want open borders. They want to flood immigrants into this country without being properly vetted. America Last... Our sons and daughters last... Feels like we as Americans have become the enemy of radical lefts agenda. There is a reason they call us the "Right"... right?

I am America and Americans First! The illegal immigrant who killed my son and had been deported twice before that. He served only a two year sentence and was imported again. The way the Democrats loathe our country, he's probably riding our streets again with a check from you and me.

In Tallahassee I will fight to defend the proper process of immigration and support legislation to eradicate illegal immigration in every form. We do not even know how many illegal immigrants were sent into our state under the shadow of night by Biden and his repopulation squad. Trust me... I WILL FIND OUT!

There is no bond stronger than Family. Yet today we see an attack on the very definition of Family. The radical left and it's media soothsayers dish out orders to the elected left to fulfill their desires. What is that desire? A country without gender, children without discipline, a one world order... Think about that.

I will work to develop and support legislation that will limit their power in our State and Our District. Political propaganda has no place in our homes, schools, houses of worship, workplaces, and even in grocery stores. I will defend the rights of the Conservative family at the State level and beyond. The destruction of America is happening right before our very eyes. We must act and we must act now.

We can put an end to this but we must work together to accomplish these goals. Stand with me this November 8th.

We can all see how well the "defund the police" movement is doing. It's not doing well at all. But yet the liberal media and their elected soothsayers remain silent. While citizens of "Blue Cities and States" fear for their safety and their lives I am determined that Florida will not be this way and I will work to make sure of it.

The atrocious breach of citizen safety has even reached our families as well. Federal Leftist Legislatures want to define your family and children for you. Like I always say, "good citizens were raised by good parents". To me one of the greatest crimes against the citizens of the United States is a Government that defends rioting, looting, disobedience, and a media who lies and spreads lies for the ultimate goal of making you hate your country. It is a gross misuse of power for ulterior motives and it too must be stopped. It must be treated as what it is, a crime against the people.

If we are to Make America Great Again then we must make ourselves great again. We must obey the rule of law and conduct ourselves in an orderly fashion. I will defend and promote legislature that defends our first responders, our citizens in blue, and all those who beckon to the call of defense of this great State and Nation.

My husband served in the Navy for 20 years. The military taught me some of the most memorable ideals on what it is to sacrifice, defend, and love my Country. Not just the geography of the United States, I mean the Country which is you and my family.

The homeless rate for Veterans is staggering. The suicide rate for Veterans is inexcusable. The richest Country in the world has money for illegal immigrants, for staying at home instead of working, for hiring thousands of agents to check your $600 bank account, yet very little who have witnessed the cost of Freedom. Why?

It's all part of the "America Last" framework. That is frightening.

I stand with Veterans. I stand for caring for those who fought to care for us and our way of life. I stand for showing them the support, both financially and medically, that they deserve.

The educational institutions of this Country are under attack. During the last 13 years we have seen schools brainwashing our children with leftist ideologies that force them into behavior they would have otherwise never followed.

The left wants to silence your voice as a parent from having any voice in the schools, universities and colleges. They will have the FBI investigate you if you say your mind at a school board conference. When will it ever end?

I will limit federal overreach in the school systems through sponsoring and supporting bills that make our public schools a place of education for the future, not agenda. I will work hand in hand with the School Board of District 12 to ensure that education is just that, education, not a pulpit for Marxism.

Help save our Great State from the radical left's war against the values that made us great!

I stand with and support Gov. Ron DeSantis! 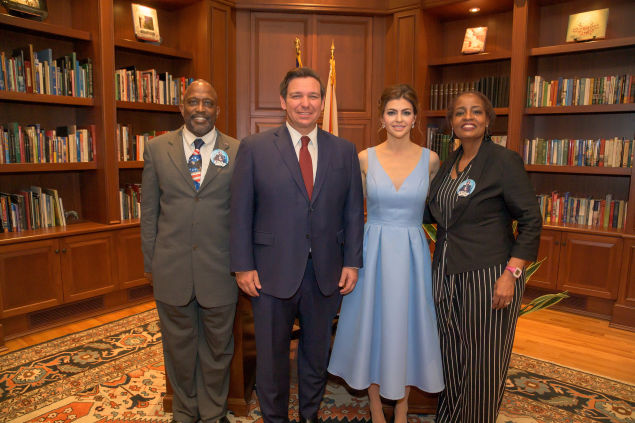 Be Ready to defend your way of life on August 23rd. 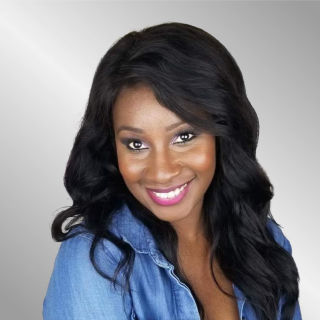 "As the only political outsider in this race, Kiyan is the only candidate that will help drain the swamp in Tallahassee. We need someone who will stand up to the lobbyists and special interests and put our families first. That’s why I look forward to campaigning with Kiyan in the coming months.” 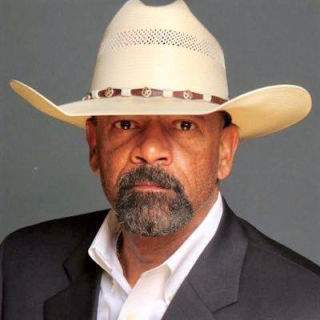 “I endorse Kiyan Michael for State Representative because she is the ‘law and order’ candidate in the race, Kiyan Michael will never fold to the special interests and will always put the safety of the families and children of House District 16 first.” 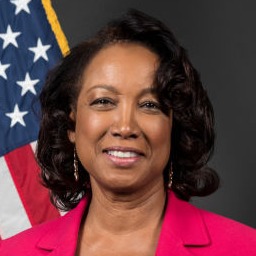 “Kiyan Michael is a true patriot who’s suffered the ultimate sacrifice and has the heart, passion, intellect, and knowledge to be a representative of the people. What we need in our elected officials today are leaders who will listen to the people and do the will of the people to improve lives and provide a safer future. Kiyan is running for State Representative to put families over politics. She will make a great people’s representative in Tallahassee, and I enthusiastically endorse her for House District 16” 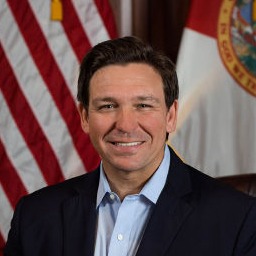 @kiyanforfl has stood with me in the fight against illegal immigration & will be a leader in the FL House as we fight Biden's open border policies.

I am proud to endorse her candidacy for HD 16.”

An Angel Parent of the late Brandon Randolph, Michael served as a member of the Black Voices for Trump Advisory Board.

JACKSONVILLE, FLA. - Today, Kiyan Michael announced that she filed the paperwork to become a candidate for Florida State House of Representatives, District 16. A lifelong resident of Jacksonville, Michael was most recently a member of the Advisory Board of Black Voices for Trump. In that role, she and her husband, Bobby, traveled the country in support of President Donald J. Trump’s 2020 Presidential race.

Kiyan is an “Angel Mom” due to the tragic death of her middle son Brandon who was killed in a car crash caused by an illegal alien who had been deported twice prior to the incident. The Michaels have been outspoken supporters of Governor DeSantis’ efforts to create stronger laws related to border security to keep other families from having to endure a similar tragedy.

“I’m very excited to start the campaign for State Representative,” said candidate Kiyan Michael. “I am a political outsider with no ties to special interest groups in Tallahassee. My priorities are to give a voice to Angel Families like ours, to protect our state from illegal aliens and help Governor Ron DeSantis to be re-elected in 2024..”

Kiyan has extensive grassroots experience in Duval County and throughout the United States working tirelessly for President Trump’s re-election campaign in 2020. Kiyan also previously served as the command ombudsman for the USS George Philip (FFG-12). As the official liaison between the command and the families of crew members, Kiyan was in charge of providing support and guidance for those families while the ship was at sea. Kiyan’s husband Bobby retired after a career in the United States Navy.

Kiyan added: “I’m pursuing this office because our families deserve an America First agenda. The pain that we experienced during our son’s tragedy will have purpose. Angel Families can no longer look to our elected officials. We must take action ourselves, and I look forward to sharing our story and message on the campaign trail in the upcoming year.” 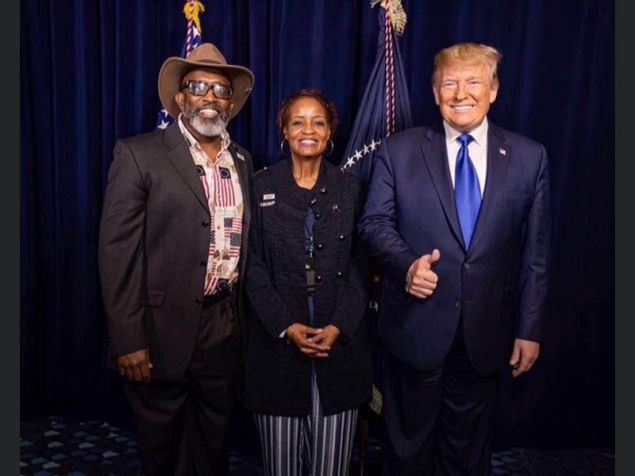 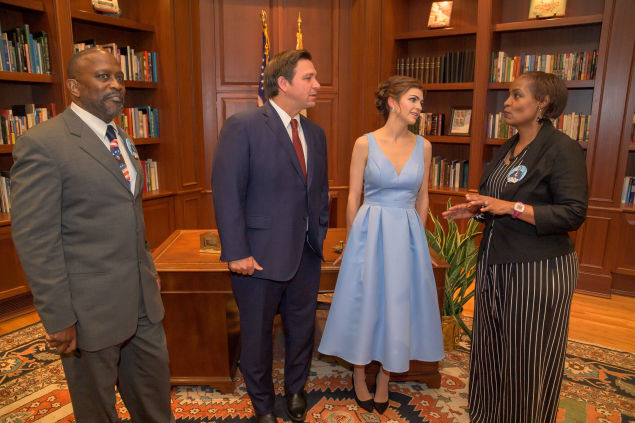 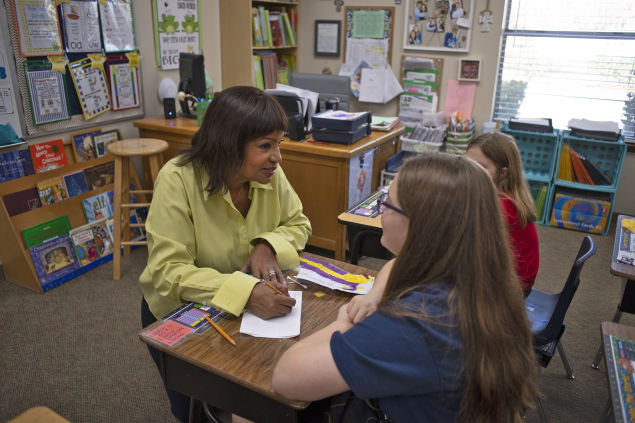 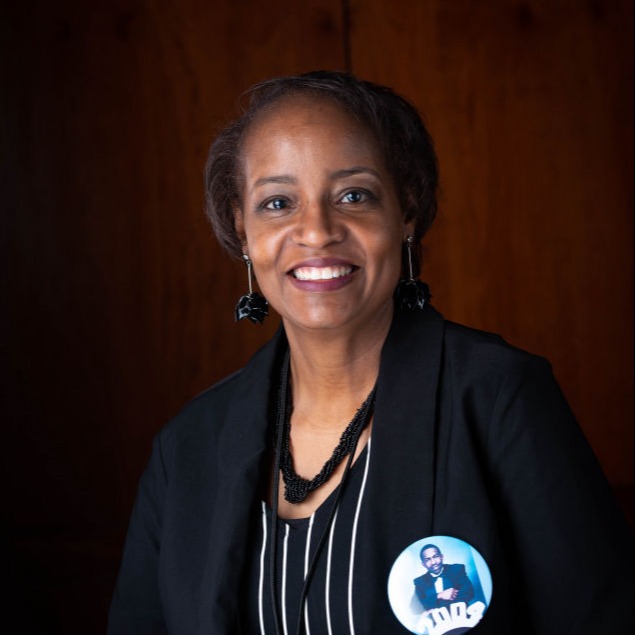 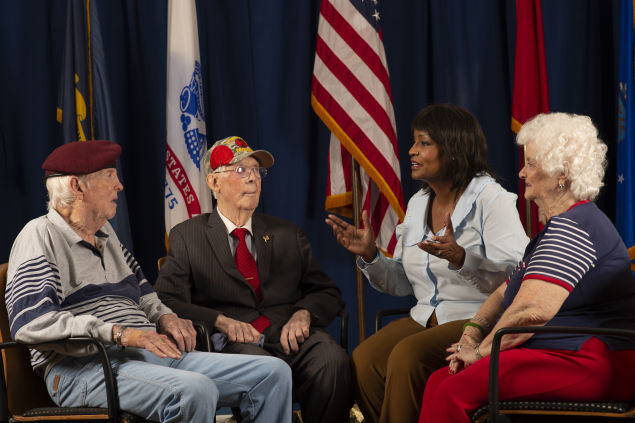 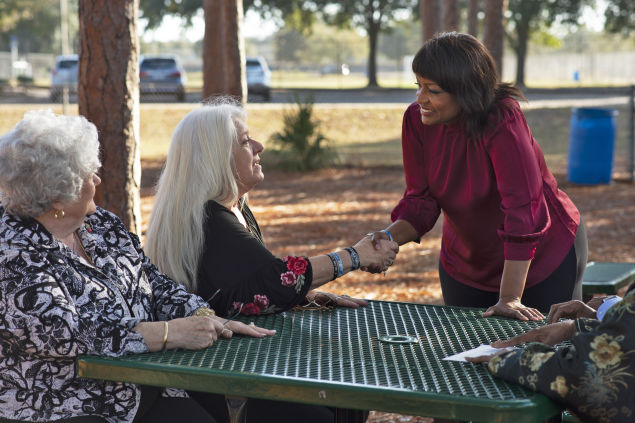 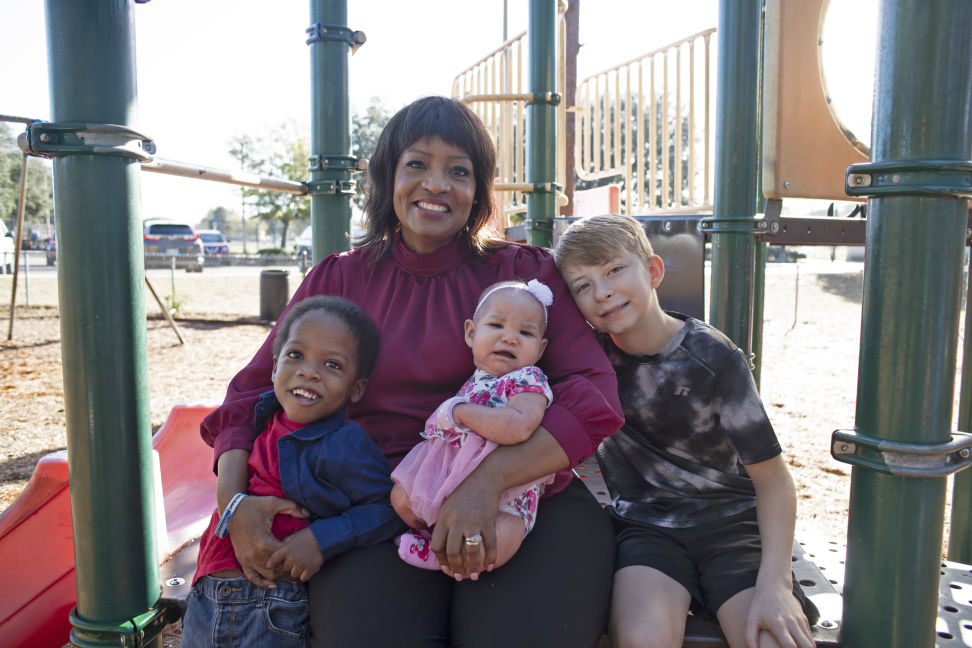 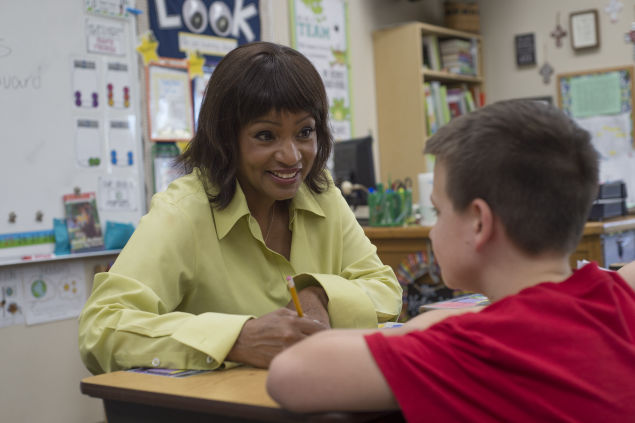 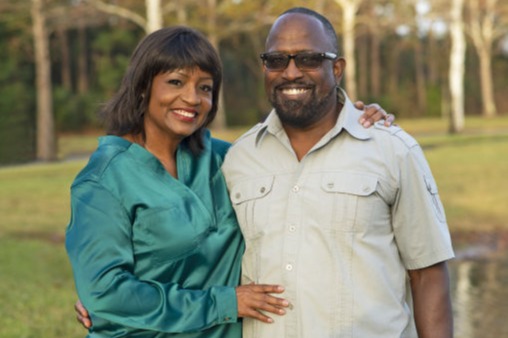 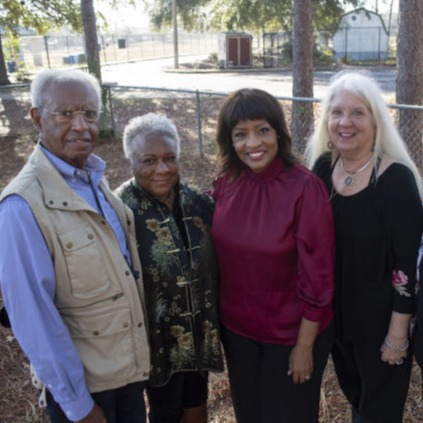 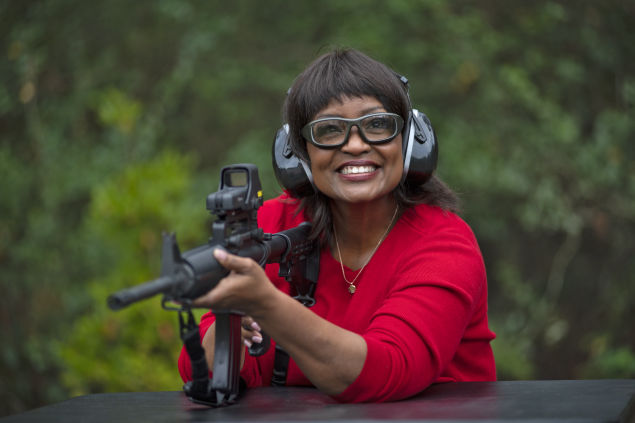 Together we can protect our state from the radical left!

Involve Your Friends and Family

What She Stands for